This article is about Geographic targeting when setting up ads in Google, Facebook or any other pay per click platform.

You might be wondering, HEY, this seems kind of simple. I just target the area I want to do business, right?

That part is simple, but we’ve learned some tips and tricks over the years, mostly the hard way!

We’ll use Google Ads to illustrate for this post. I’ll start with the geographic targeting function to run through some scenarios and how to handle them.

We’ll start with a basic one, using the area we’re in as an example.

A business located in Raleigh, North Carolina might have customers in the entire Triangle area, which includes Raleigh, Durham and Chapel Hill. However, the majority of clients, say 60%, are in Raleigh, therefore I want to allocate a larger percentage of my budget to the area I’m most likely to generate new customers.

Rather than selecting the Raleigh-Durham DMA, I’ll select Wake County, which where Raleigh is located.

I’ll create a campaign and allocate 60% of my Google Ads budget.

An added benefit is that I’ll be able to track contacts such as calls and form fills for each area. If it turns out they are more expensive, or the conversion rate is lower, or higher for that matter, I can adjust my budgets to where I’m getting the business.

Another approach is to target by zip code instead of city, county or DMA. Returning to Wake County, if the service I provide is expensive, I may want to only target zip codes above a certain household income level.

When we start to move to the regional or national level, we can target by state, or we can target the U.S. and then exclude individual states if we don’t sell into those markets. Alaska and Hawaii can be an issue if you sell a product that is expensive to ship, so those would be obvious states to exclude.

Here’s a tip we learned while expanding a campaign from the regional level to nationwide.

We were advertising for a legal client and targeting about a dozen states in the mid-west. Our cost-per-click was consistently in the low 30 dollar range.

The client was ready to expand to the entire U.S., so we created a new campaign. Everything was the same except the geographic targeting and budget. When the campaign started, clicks were running $90 each.

My first reaction was “what the hell?”

We weren’t going to wait around to see if it was a competitive issue, or Google just thought they could charge more because the budget was larger, or it was something else.

I speculated that we might be able to get back to the 30 dollar clicks if we tried advertising on a regional basis again. We set up a campaign for the west coast, basically all the states west of the Rockies. And sure enough the cost-per-clicks were coming in around 30 dollars.

The next question was, would this work for the rest of the country? So we set up campaigns that roughly divided the country into three regions, divided the budget evenly, and fired it up.

Sure enough, the cost per click stayed in the low 30 dollar range for all of the campaigns, and they continue to produce results.

Google is pretty good about figuring out where someone is, and whether or not they meet your criteria for geographic inclusion in targeting. But there are limitations and when someone isn’t signed into the Chrome browser, Google is limited in what they can see. They are also making assumptions based on geographical search terms, which could indicate that someone is in that area, or they have curiosity about that area but aren’t physically there.

Google also gives itself some latitude in where your ads are shown. When setting up a campaign the default Location Option is “Presence or interest: People in, regularly in, or who’ve shown interest in your targeted locations.” This is Google’s recommended setting. 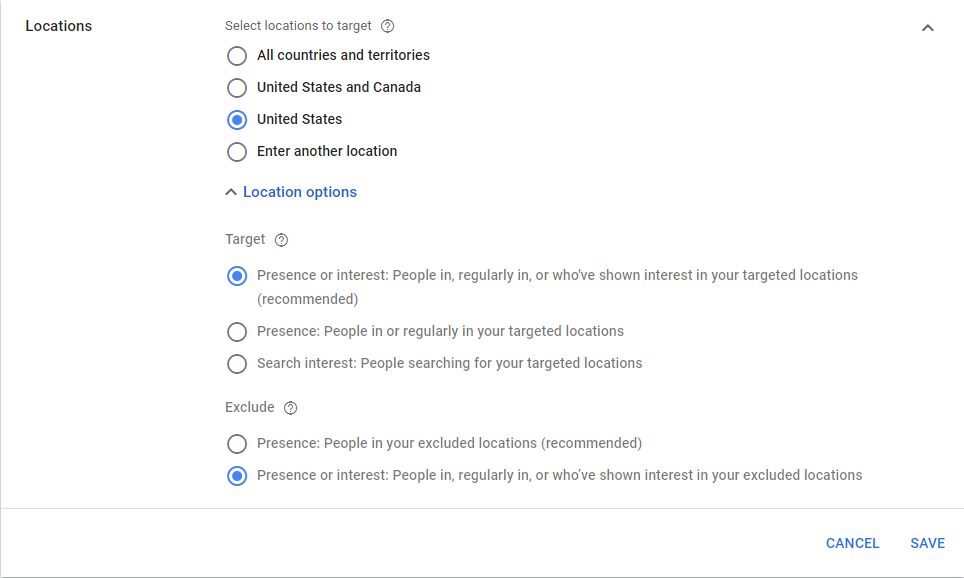 Someone that’s shown interest in your locations could have many reasons for doing so, but has no intention of travelling there or buying anything there.

That means someone in a foreign country might express interest in the area you are targeting, but their reason is because they want to sell you something, not purchase your product or service.

Something we’ve been doing for a number of years now is Excluding everywhere we don’t want to advertise. For Google we created a list of all the countries in the world in a spreadsheet. We can copy and paste that into Google under the bulk upload feature.

We’ve also created a list of all the states in the U.S. We can copy and paste when the advertiser is local to a region or city.

By excluding everywhere that we aren’t targeting, we eliminate the bad traffic that isn’t ever going to convert. It’s not a 100% foolproof solution, but you’ll solve 98% of the problem of traffic from outside your targeted locations.

There are options to exclude in all the social media platforms we advertise on, and it will help to keep your ads showing in the geographic areas you want.

Need help with your pay-per-click advertising campaigns? Schedule an appointment with me to talk about opportunities for improving your results. Click here to access my calendar: https://erics1.youcanbook.me/